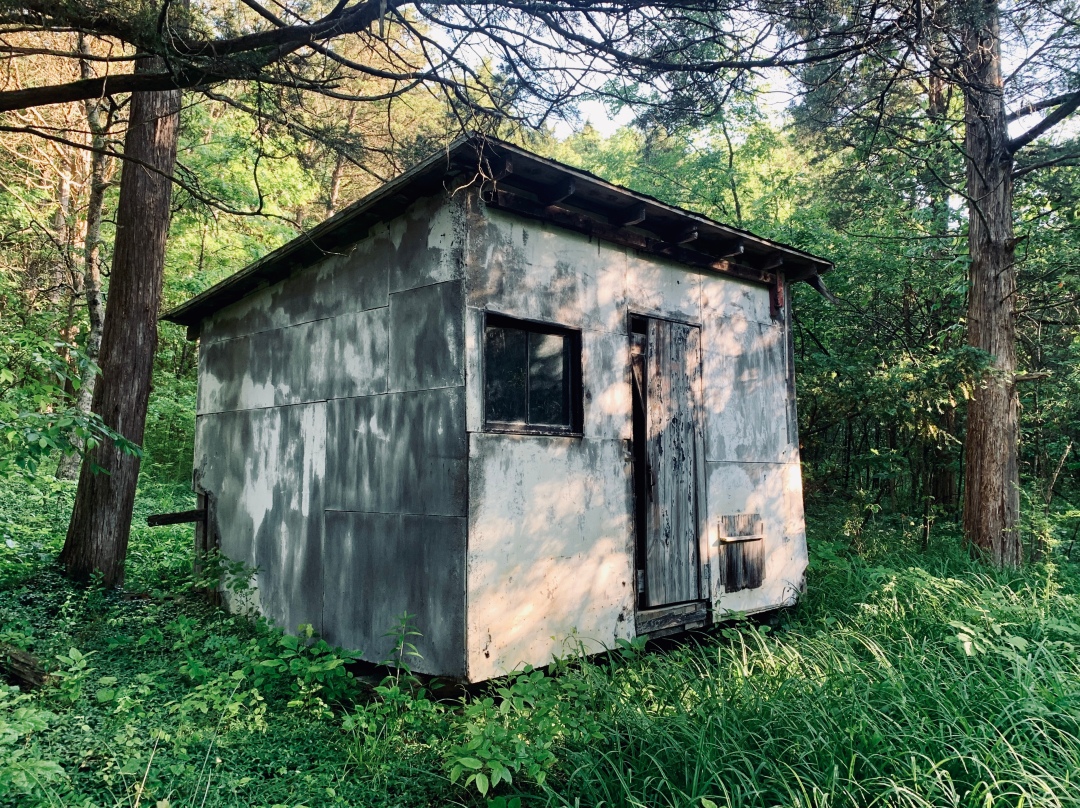 Solitude in a Toolshed

In May of 2019, I took a lovely monastic stroll with Brother Paul Quenon at Gethsemani Abbey, the monastic home of Thomas Merton. We walked to a toolshed on the monastic property where Merton had sought permission to for more solitude beginning in January of 1953, years before his hermitage days. From this shed in 53-54, during a few hours each day, he wrote Thoughts In Solitude (published in 1958) (which hosted the original title of Thirty-Seven Meditations), the book in which we find what is often referenced as “The Merton Prayer” (which you can find at the end of this post).

Upon approval from the Abbot (Dom James), he named the toolshed “St. Anne’s” and declared in his journal, “It is the first time in my life—37 years—that I have had a real conviction of doing what I am really called by God to do. It is the first time I have ‘arrived’—like a river that has a been running through a deep canyon and now has come out in the plains—and is within sight of the ocean.”

While many assume the shed’s name to be after the mother of Mary, and thus the ultimate wisdom, it also seemed to be a name which followed Merton, including the fact that his father and mother were married in St. Anne’s Church in Soho, London.

He wrote about the surrounding landscape of St. Anne’s and how it reminded him of his walks as a youth in Sussex England: “I recognize in myself the child who walked all over Sussex. (I did not know I was looking for this shanty or that I would one day find it.) All the countries of the world are one under this sky: I no longer need to travel… The quiet landscape of St. Anne’s speaks of no other country.”

On February 9th, 1953, amid the feast of St. Scholastica, Merton spent the evening in St. Anne’s writing, “It is a tremendous thing no longer to have to debate in my mind about ‘being a hermit,’ even though I am not one. At least now solitude is something concrete–it is ‘St. Anne’s’–the long view of hills, the empty cornfields in the bottoms, the crows in the trees, and the cedars bunched together on the hillside. And when I am here there is always lots of sky and lots of peace and I don’t have any distraction and everything is serene–except for the rats in the wall. They are my distraction and they are sometimes obstreperous… St. Anne’s is like a rampart between two existences. On one side I know the community to which I must return. And I can return to it with love. But to return seems like a waste. It is a waste I offer to God. On the other side is the great wilderness of silence in which, perhaps, I might never speak to anyone but God again, as long as I live.”

A few days later Merton wrote, “The landscape of St. Anne’s speaks the word ‘longanimity’: going on and on and on: and having nothing.”

Although the hunt for more solitude was a pattern in Merton’s life, the sense of “arrival” was palpable for him in rat-infested toolshed: “It seems to me that St. Anne’s is what I have been waiting for and looking for all my life and now I have stumbled into it quite by accident. Now for the first time, I am aware of what happens to a man who has really found his place in the scheme of things. With tremendous relief I have discovered that I no longer need to pretend. Because when you have not found what you are looking for, you pretend in your eagerness to have found it. You act as if you had found it. You spend your time telling yourself what you have found and yet do not want. I do not have to buy St. Anne’s. I do not have to sell myself to myself here. Everything that was ever real in me has come back to life in this doorway wide open to the sky! I no longer have to trample myself down, cut myself in half, throw part of me out the window, and keep pushing the rest of myself away. In the silence of St. Anne’s everything has come together in unity” (February 16, 1953).

Interestingly, some of these phrases about home and belonging Merton would continue to untangle, writing after lighting the first fire in the hermitage’s hearth in December 1960, “Haec requies mea in saeculum saeculi [This is my resting place forever] – the sense of a journey ended, of wandering at an end. The first time in my life I ever really felt I had come home and that my waiting and looking were ended.”

Support my work and get exclusive updates

“My Lord God,
I have no idea where I am going.
I do not see the road ahead of me.
I cannot know for certain where it will end.
nor do I really know myself,
and the fact that I think I am following your will
does not mean that I am actually doing so.
But I believe that the desire to please you
does in fact please you.
And I hope I have that desire in all that I am doing.
I hope that I will never do anything apart from that desire.
And I know that if I do this you will lead me by the right road,
though I may know nothing about it.
Therefore will I trust you always though
I may seem to be lost and in the shadow of death.
I will not fear, for you are ever with me,
and you will never leave me to face my perils alone.”

— Thomas Merton, from Thoughts in Solitude

One thought on “Solitude in a Toolshed”